Ranked: the main causes of MOT failure for vans

Last year, we brought you data on the results of MOTs conducted between April 2014 and March 2015. They painted a sobering picture for commercial fleets: 49% of all heavier vans (those weighing between 3,000 and 3,500kg) failed their initial MOT – significantly higher than the failure rate among smaller vans, cars and other private passenger vehicles.

The Driver & Vehicle Standards Agency have recently released updated results for the year to March 2016 – here’s how the picture has changed.

The good news is that MOT failure rates have fallen across the board, albeit only slightly. For heavier vans, it’s down from 49.0% to 46.8% – as our graph below shows. 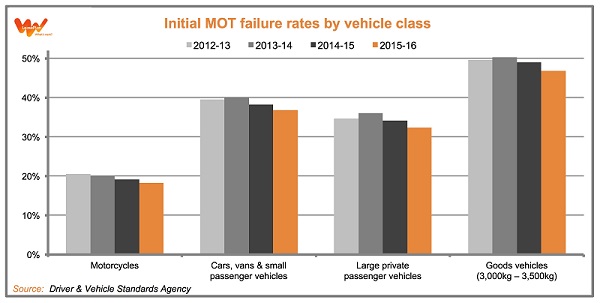 Our second chart, below, ranks the most common reasons for a large van to fail its MOT. As last year, problems with the vehicle’s lights are the most often the cause, followed by faults in the brakes and suspension. 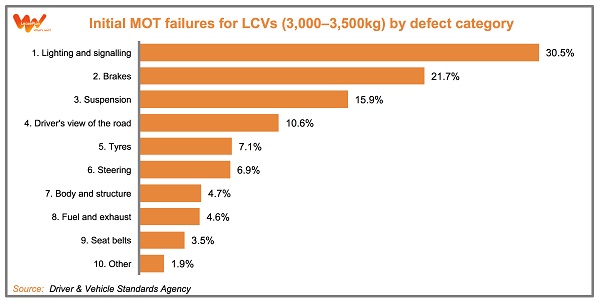 Worryingly, although the overall failure rate is lower, the top four defects on that list (lights, brakes, suspension and the driver’s view) all cropped up more often in 2015-16 than they had the year before.

Fleet managers looking to ensure their vehicles pass their MOTs – and, most importantly, to keep their drivers safe – should encourage drivers to make daily checks of vehicles, paying close attention to the areas highlighted above.

Expert opinions, guidance and insight for you

Helping your van drivers get moving and stay safe

If your van drivers are getting back out on the road, you need to keep them safe. We have some suggestions.

Thinking E-LCV? Here’s what you need to consider

There’s a lot of change with commercial vehicles right now and it looks like everything is pointing in the direction of electrification. For example,…